Networking is hard. It’s no coincidence that “working” is the main part of the word. But networking is mandatory. Period. Just applying for “real time”
openings won’t get it done for most of us. 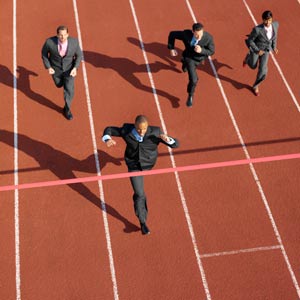 Networking is not schmoozing or being someone you’re not. It’s simply showing people you’re serious and curious about their work. Joe Sweeney, author of Networking is a Contact Sport, teaches that networking is about giving not getting. And giving doesn’t have to just mean expertise, advice, or a helpful perspective, as great as that is. It can also be just as important to provide someone genuine interest in their organization or job –and great questions based in research. When people are approached with professionalism, sensitivity and authenticity, most people want to help. Dick Bolles author of What Color is Your Parachute sold 10 million books based on that universal truth—information seeking is your best job seeking strategy.

In my early 20s, after a difficult post-college year, I moved to a new city with only a vague notion about my professional direction: I thought I might be interested in working in nonprofits. A contact from back home gave me the name of someone who worked in that sector, who might be willing to give me an informational interview. I left that person a voicemail, and didn’t hear anything for a few days. I was nervous about talking to a stranger, and also unsure about whether this person would even be able to help, so I decided not to follow up, and crossed his name off my to-do list.

Luckily, he called me back that very day. (Later, he told me that this was only out of loyalty to his contact, the one from back home.) He answered my questions about his work, and soon picked up on my enthusiasm and sense of connection with what he described. He asked whether I was looking for work, and invited me to interview for a job that they had been thinking about creating. Originally, the job was intended to be part-time, but we hit it off in the interview, and he changed it to a full-time position. I ended up working there for six years, discovered an entirely new field that fascinated me, and developed knowledge, skills and contacts that have continued to serve me profoundly. I will always be grateful for how that one chance connection shaped my life.

“We learn who we have been and who we might become ––in practice, not in theory—by testing fantasy and reality, through exploration and examination, not just by looking inside.”
Herminia Ibarra

These kinds of contacts have continued to play a vital role in my career. Again and again, when I have found myself discouraged or confused about my professional direction, I have found solace and inspiration — and sometimes new opportunities, including jobs — through conversations with others. Often, an old contact can connect me with someone who helps me learn about a new possibility or a better way to handle a dilemma.

A key piece of advice I offer to people in transition is to search yourself for what interests or questions are currently real for you, and then to seek out people with whom you can explore those ideas. Make it real. There is no way to answer these questions except by learning about what actual people are doing in the world, and sometimes by getting out there and doing it yourself.

Receive news and ideas from us, including TranSpirations, messages about transition and spirituality, along with notices of upcoming events will be sent to you. Subscribe now.